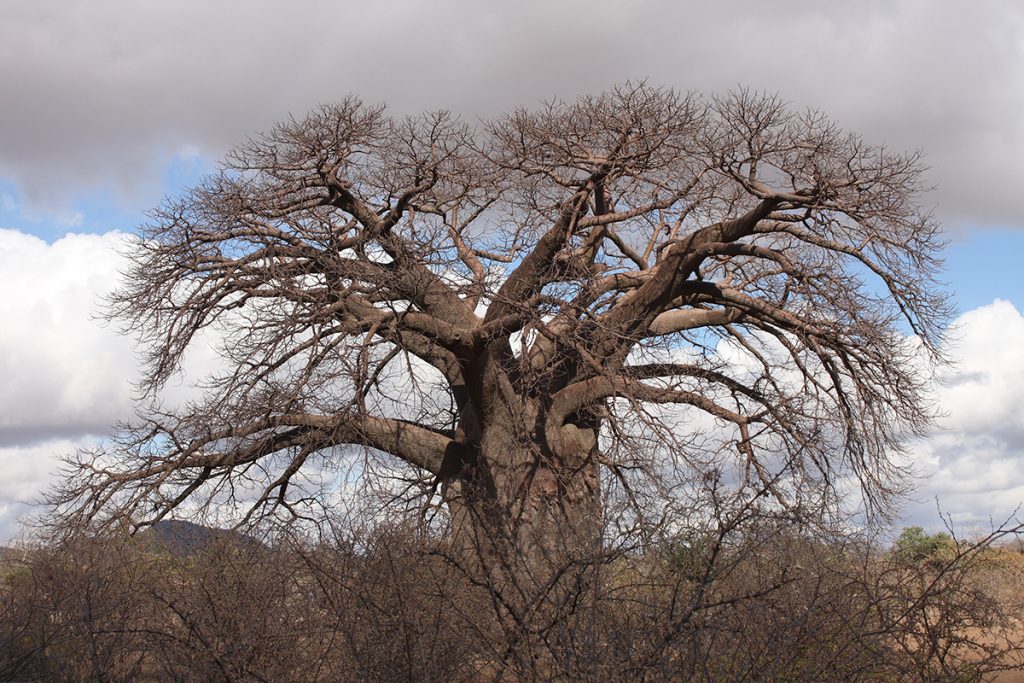 The baobab is in the family Bombacaceae and its botanical name is Adansonia digitata. It was known and described as far back as 1754 when formally described by Linnaeus. The name digitata is in reference to its digit or finger-like spreading branches, which actually look more like roots.

Baobabs are grotesquely large in terms of their trunk diameter with some individuals exceeding a circumference of 30 meters. Depending on various methods deployed, including ring counts and carbon dating, very large baobabs are believed to be between 2000 to 4000 years old. To put that into perspective, some trees were in existence before the birth of Jesus Christ.

Despite the large circumference, baobabs only reach a height of 10 – 15 metres. The wood is actually soft and pulpy with a dry weight of 320 kg per cubic metre. As a result, it holds water very well but when the tree dies and dries out, it collapses into a heap of fibrous material which is either blown or burnt away, leaving no trace of its former glory. These trees are not tolerant of frost and extreme cold and that’s why they are found in the far northern parts of South Africa and extending north into Zimbabwe, Mozambique, Botswana, Namibia, Angola, Zambia and Malawi.

Throughout most of the year the tree is leafless but during the rainfall season will develop small digitate leaves, each with 5-9 leaflets, casting a green layer over the branches. The flowers are white in colour and up to 20cm in diameter and almost look like crumpled tissue paper with a protruding ball of pink-tipped stamens. Trees flower from October to December and fruit bats are the main pollinators. Flowers hang downwards and open fully at night when their pollinators are most active. The smell of flowers can be rather pungent but clearly attracts its preferred guests. Flowers fall from the tree after about 24 hours and are eaten by various antelope and other herbivores.

The fruits are oval and yellow, growing to 12 x 24 cm, resembling boxing bell-balls. They protrude off a stem and the outer casing is hard and woody. However, the pulpy flesh within is nutritious and high in ascorbic acid, especially the seeds. It can make a refreshing bushveld drink when mixed with water!

A tree of many uses

The baobab is an extremely useful tree for humans and animals and has been utilised for thousands of years. Interestingly, almost all parts in their various growth forms are edible and can be consumed by people. The leaves may be cooked like spinach. If eaten raw, the tannins can cause an upset in the digestive tract, although they have been used therapeutically to treat fevers and diarrhoea. The roots too are edible, and are usually ground to make a porridge or flour. Water can be extracted from the inner bark and pulpy flesh, but this has a bitter taste. Nonetheless, it can serve as a good, clean source of water in survival situations. Elephants are known to ring-bark baobabs for getting to the water, but remarkably, the baobab recovers rapidly. As highlighted above, the fruits themselves are nutritious, including the seeds which are dried and can be brewed as a substitute for coffee. The seeds are also rich in protein and oils.

The baobab is an ecological condominium inhabited by a wide variety of species. The tree acts as a natural reservoir for water, not only as storage in its pulpy fibre, but the many natural cavities and hollows allow water to accumulate. Birds, baboons and leopards know this all too well. The cavities also provide excellent enclaves for bees and their hives. As a result, humans and animals are familiar with baobabs as repositories of water and honey.

In addition, the cavities and hollows provide refuge and foraging grounds for numerous mammals, birds, reptiles, amphibians and invertebrates. Tree squirrels and fruit bats are regular occupants, and many birds will use the cavities as retreats or nesting sites. Several reptiles, including Turner’s Gecko and Velvet Gecko -and snakes, all take shelter inside the holes.

Due to their size and odd shape, it is no surprise that the baobab has created a wealth of folklore and legend. Sit under a baobab at night and you will be joining the spirits and ancestors… and don’t pluck one of the fluffy white flowers…the spirits frown upon this, and you might be devoured by a lion!

It is also believed that baobabs were planted by hyenas, who were annoyed that they were left till last, when all the animals were given plant seeds to sow. As a result, the hyenas planted the baobab upside down, in spite, and ran away laughing into the darkness…

The seeds, when stirred in a barrel of water, are said to offer protection from crocodile attacks. However, if you suck on the seeds, you may in turn attract crocodiles.

A baby boy bathed in an infusion of the bark is believed to then grow up strong…but there is a time limit, as too much bathing in this mixture will lead to obesity.

The huge girth of the trunk, and the hollows within, have led to several famous baobab trees which have been converted into pubs, shelters, and even prisons. The Sunland Big Baobab near Modjadjiskloof was converted into a wine cellar and pub, and another baobab had a road running through its core. Whilst widespread across parts of southern Africa, baobabs are under threat from development, road building and mining activities.

We need to look after these magnificent giants of the bushveld so that generations ahead can look on in awe on a landscape of baobabs holding up the clouds, and the spirits can rest easy.